There are definitely countless photos that many of us want to reproduce with ourselves in the main role.

Stand at the edge of the Grand Canyon, and looking over it, propelling the Leaning Tower in Pisa or mirroring us with the mysterious Angkor Wat in the clear waters of the lake in front of it … and there would be a bunch of such “pictures” to which we were dreaming many of us.

But if I ask you, which is definitely the photo that each of us would want to do at least once in his life – without hesitation! Would not it be that reading a book and floating at the same time on the water of the Dead Sea ? Am I right?

Being in Israel in the middle of the summer, there is no person who has not warned me between July and August: Do not go there now! It’s extremely hot.

But that image floating on the water could not get me out of my head. I said at least a day or two to see what it is – and said – one morning after the sunrise I took the bus from Jerusalem (about this city probably wrote a book) to the Dead Sea.

We did not leave town well enough for the scenery to become more and more in a stone and sand dessert with a few boschteti rasfirati here and there. 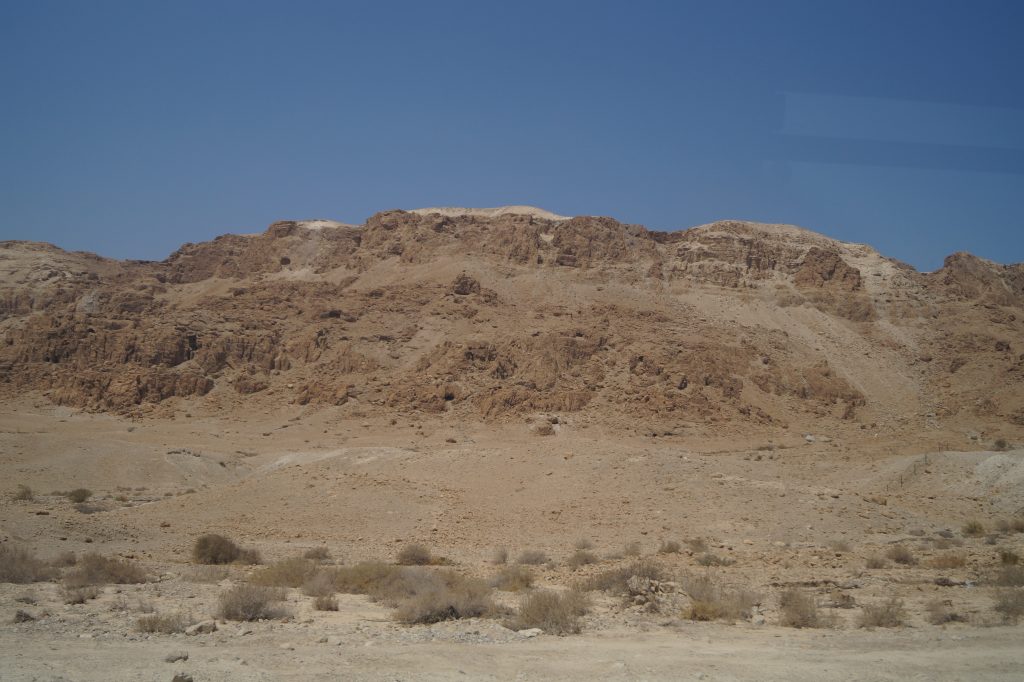 About half an hour later, we reach a roadblock – just a few yards away begins Jordan, and it is seen shining in the sunlight and the Dead Sea water. We run further on the west coast of a lake rather than the sea. A sea for me is endless and cling to the skyline with the sky but it is at most 17 km wide and on the other side you can see the Jordan’s stone mountains. 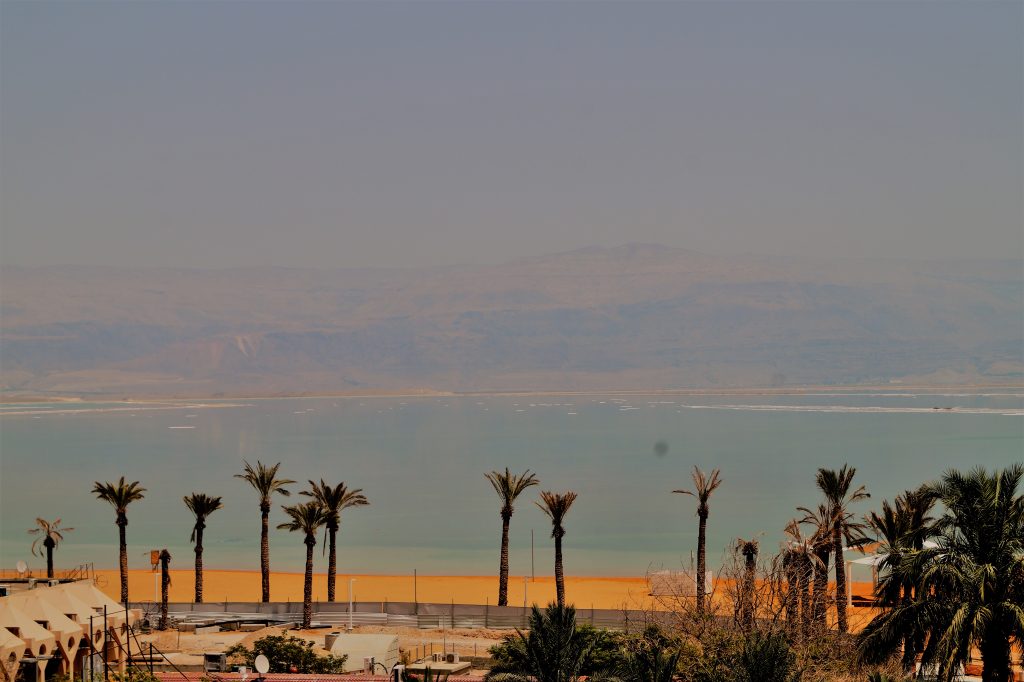 Overlooking the Dead Sea. Photo taken from the hotel room.

I am astonished to see that the shore of the sea is almost entirely covered with barbed wire and the panels with signs of “forbidden passage – danger of death” are infiltrating the earth from time to time.I knew the Dead Sea was dangerous – but that? It seems like here anywhere you can go on your own to the water. The reason is not water but the earth in this collapsing area. Craters with a depth of up to 20 meters were inserted one after the other.

As in an apocalyptic film the earth breaks and the water retreats.

The street is on the slope and always descends – sometimes I feel my ears fall (like landing) and after another good hour we get to En Bokek, the resort where we booked the hotel. But I do not even put my foot on the ground coming down from the acclimated bus as my breath breaks for a moment. Not just here the air density is different but the air is so hot that you can barely breathe it. Meanwhile, lunch time was over and the thermometer showed 52 degrees in the shade! Welcome to Sodom and Gomorra!I also welcome the SMS from my phone. The two Biblical cities that have been buried by God under a rain of fire and brimstone, because they have fallen prey to sin. Welcome to the lowest point on earth!I’ve come to hell … I’m thinking. 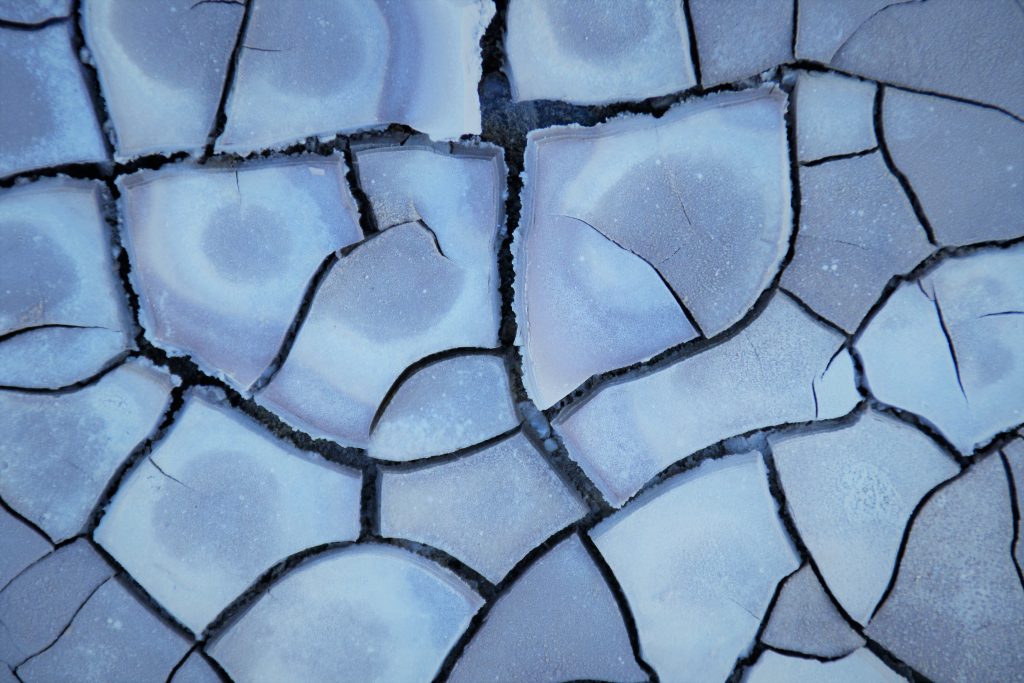 The Earth suffers … salt mosaics on the Dead Sea

Now I have to warn you and you to be careful where you are going. The Dead Sea on the Israeli side is in many places unpalatable. The buses have two destinations like Ein Gedi and EnBokek. But near Ein Gedi the coast is dangerous and the hotels have only a small private entrance. In En Bokek there is the beach and relaxation area. Here you will find the most hotels (I expect to be a lot, but there are only about ten) and a small shopping center. And do not do as I did! Do not go there in summer!

Good luck that our hotel also had an indoor swimming pool and air conditioning. I drank the two bottles of water (you feel the salt in the air and that dehydrate you) and we lingered in bed. And although I was extremely curious how to float on the sea – I waited reasonably for the sun to fall. I remembered how the road from the bus station to the hotel was just scowling and panting.

I went out at 8 o’clock in the evening – actually I could say I went into the oven at 8 o’clock when the temperature was still 44 degrees. 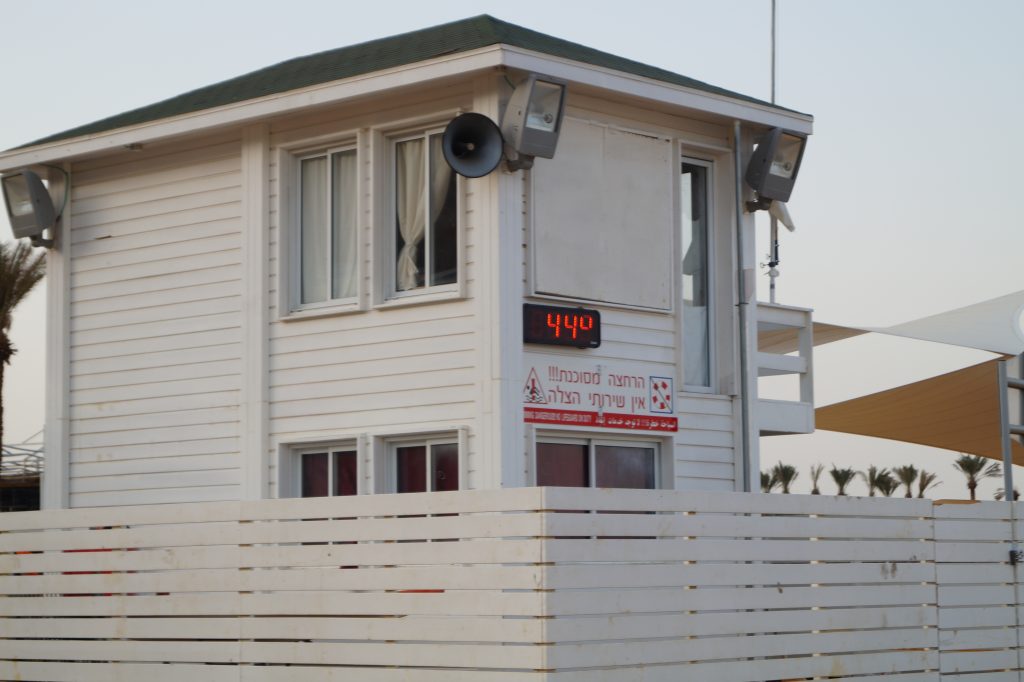 After sunset the air still has 44 degrees

In the water I only walked with the feet, observing with inappropriateness that it was almost as hot as the air and after baking I did not want to boil any more. 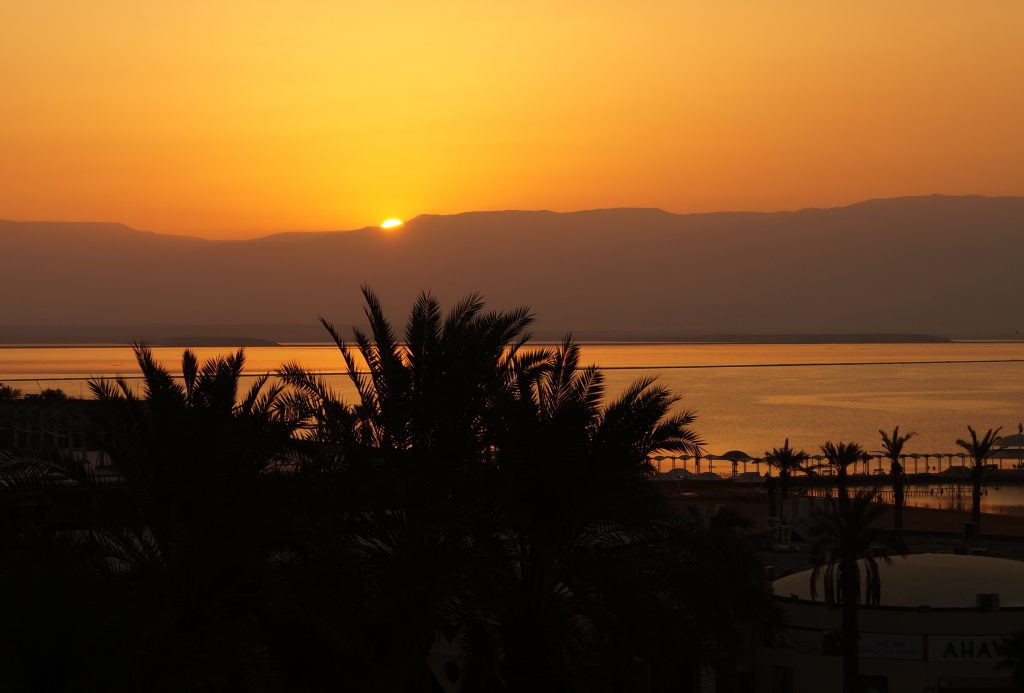 Sunset over the Dead Sea and Jordan

I hoped that the sea water would cool again overnight and so the sun at 5 o’clock before sunrise gave the sun a great chance to float.

It was only 37 degrees when we reached the beach. I had already come in bathing suits, so fast, fast in the water until the sun does not rise. However, this place is unique in the world – here you can sit in the sun without worrying about sunburn or sunburn. That’s because the ultraviolet radiation level is very low. You could ! theoretically … that I did not want to risk. 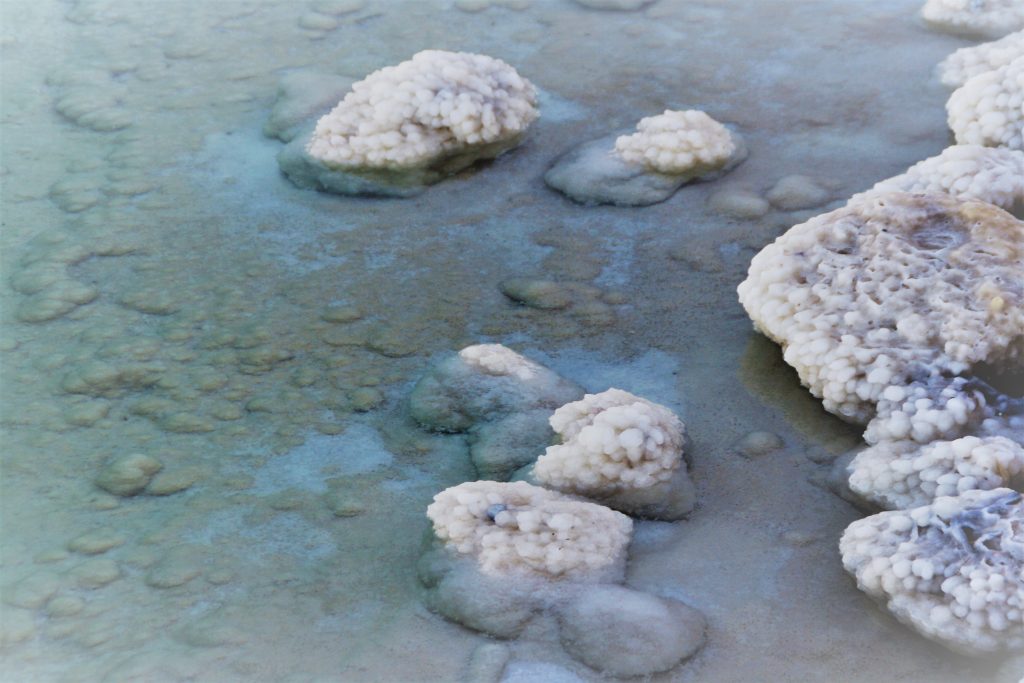 Salt in Dead Sea Water – 10 times salty than the ocean!

I took it on the pontoon and holding me on the balustrade I’m advancing in the water in a swim position … and popping my legs take it up without being able to control them anymore between the head sinking, fasting and rolling out of my belly back and it stays like that … now I feel like a scarab turned back with my hands and feet in the air trying unsuccessfully to return to normal position.

Help ! Help ! I come to shout when I know that I can not swim in any way but my husband still on the shore asks me: What do you do with your hands and feet? Will I come bring you the book?

I have to book now, you do not see me coughing! (that’s not to hear talks that you can not drown in the water of the Dead Sea).

Fear of swallowing water (which may be lethal) or spitting somehow in my eyes by mistake paralyzes me. My husband comes and pulls me as they float to the shore. 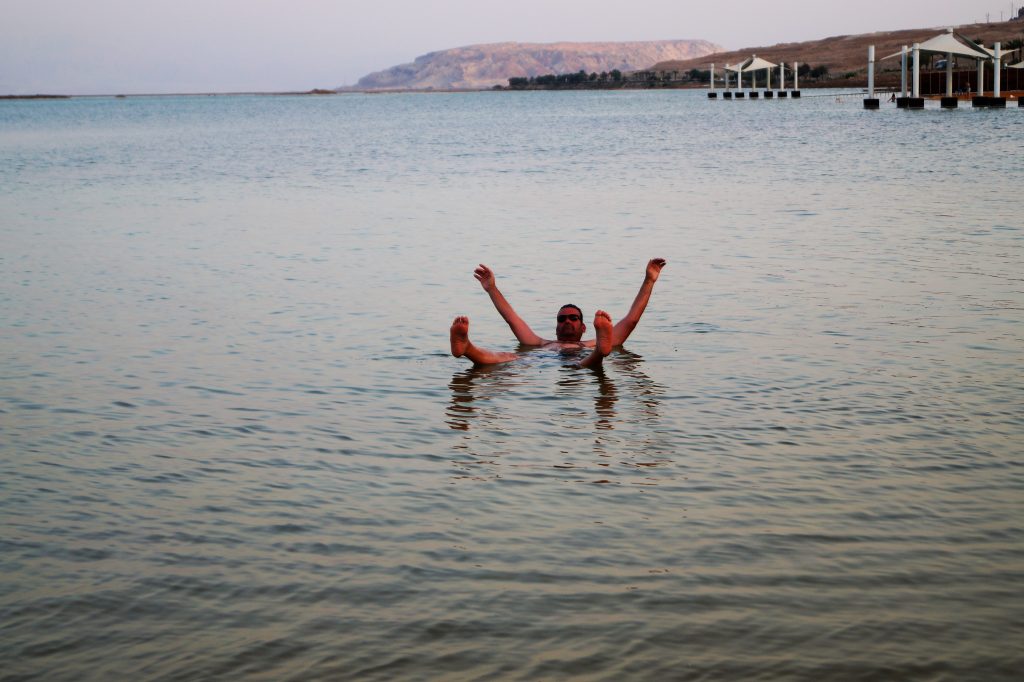 and Patrick floats like a scarab on his back

I’m not batting … I’m telling you, if I came here, I just want to make the picture with the book! This time without fear and care, I sit down on the water and let go of my back … floating, floating … what a strange feeling! 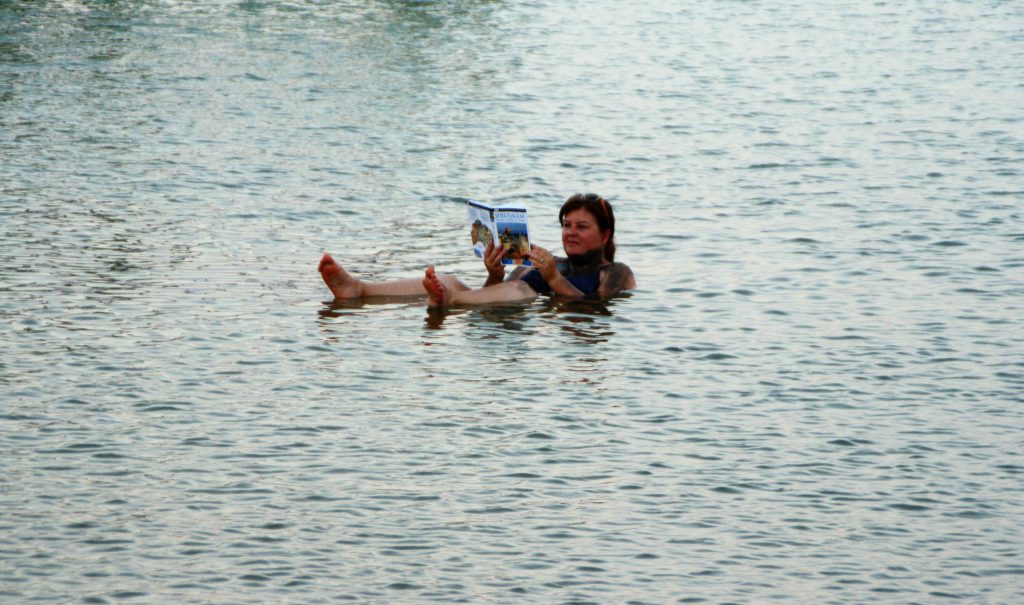 The paradox is that the Dead Sea water, though it is so salty, makes your skin smooth and smooth and going outside I feel as if I had been bathing in warm olive oil.

We stayed only 2 nights there – the day we spent in the hotel room – all the photos you see made in the daytime are made from the window of the hotel room … yet I regret not a moment that I did This one !

If you want to take this picture, it would be good to hurry. In the last 50 years, the Dead Sea has lost one-third of its surface, and every year the water retreats by one meter. “In 2050 it will remain just a small pond” predicted marine researchers … unfortunately – no matter how strange it sounds – Dead Sea  has not much more to live!