Night over Cappadocia. The clock rings at exactly the same time as the alarm on my mobile phone In a hurry, I do not even know which one to stop first, lest we accidentally wake up our neighbors. Actually I barely slept – emotions and fear that I would not be able to wake up in time. It’s 3.30 at night. And we’re on vacation.You read well – in the holidays we wake up willingly in the middle of the night.

Today we are flying … not by airplane but by balloon. Finally, one of my dreams will become true . A desire I had since my childhood after reading Jules Verne’s book “Around the World in 80 Days ” … then I was thinking, is it really possible to fly with the balloon? How can you control it? Does not the wind take you where it wants? Can you easily fall out of it? How hard is it swinging and how high can it climb? But especially how do you get down and how do you land with a balloon? All these  questions were coming to my mind again, and the euphoria I felt was mixed with the fear of getting in panic when I will have to climb into it.

In half an hour we were ready to go – and we were anxiously awaiting the bus in front of the hotel.Near us two more pairs of youngsters equally excited. The bus is punctual and after we collect another 8 people at other hotels we are prepared to … take a breakfast in the agency. It was allready 5:30 – if we knew it that all the preparation takes so long we would came to the agency directly – but now we are here…after half an hour we started with the same buses to the “take-off” place. No explanations or even safety instructions were given to us.

It’s was still dark as we get in the middle of a field where about 20 balloons were going to be filled with hot air. 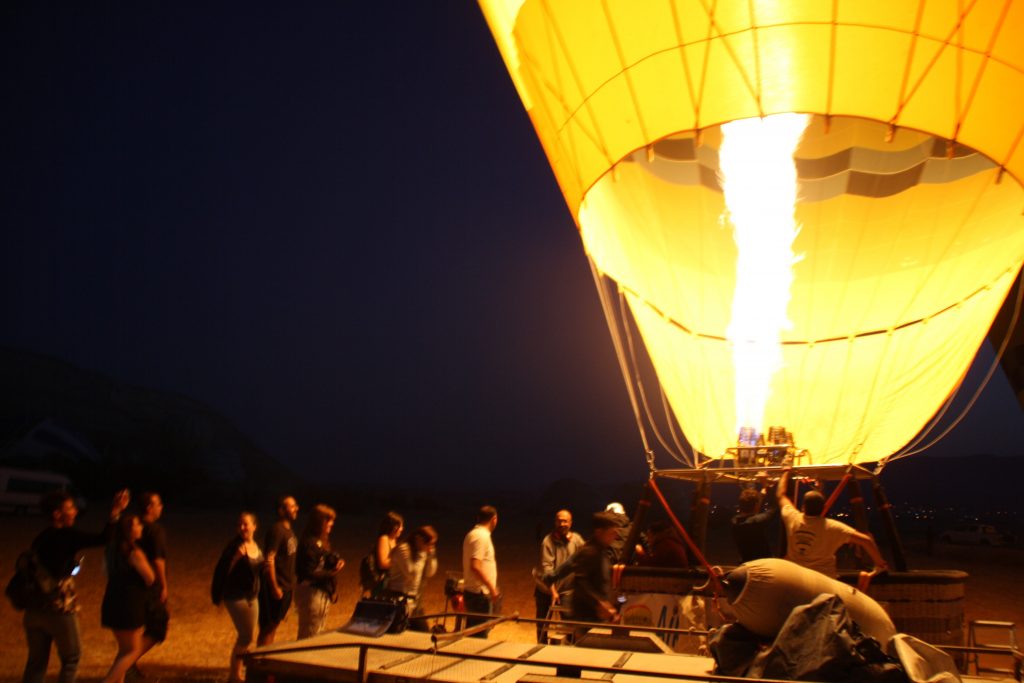 The balloon is “charged” with hot air

Ours was already uplifted so I did not have time to even figure out where I am and what awaits me, because only a few minutes later the “captain” of the balloon invites us to climb.

The basket we enter is much larger than we thought with a capacity of 20 people. We are only 16 from all over the world. Helped by a ladder we climb as fast as we can in the basket that is already beginning to rise from the ground and plunge into the wind. Hurry up!  or we leave without you! the captain shouted  to us againas wihle four muscular boys tried to fix the balloon and keep it as stable as possible. 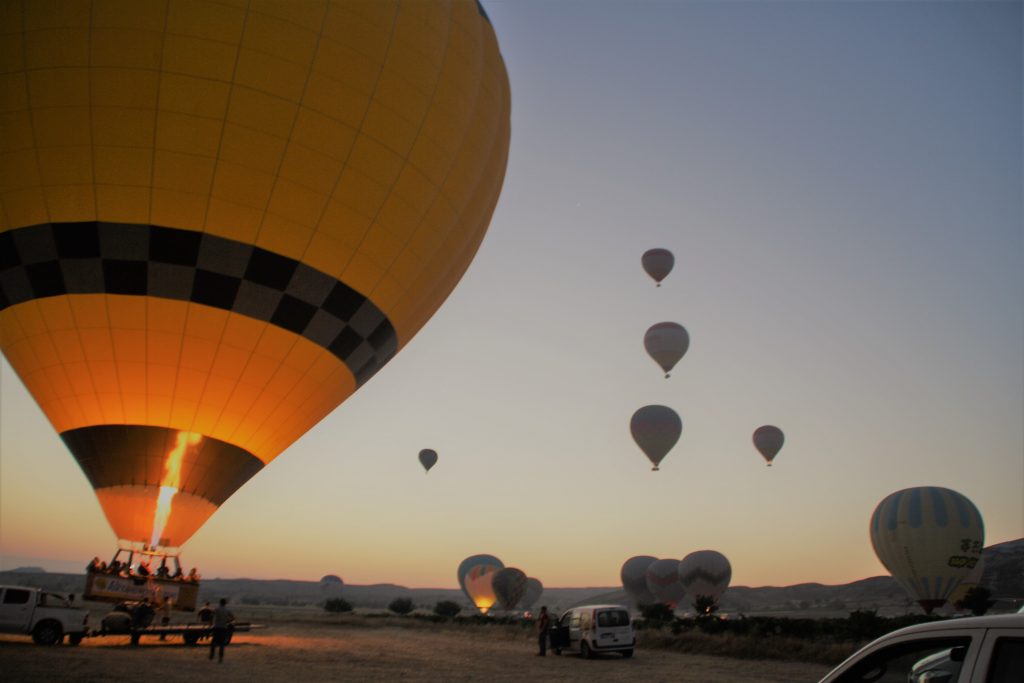 Come on, everyone on board and the captain opens the fire with power … smile please! we take pictures and huupppsss are in the air.

My stomach is getting a little queasy and a few tears of excitement beneath my eyelids. We get a bit shaky every time the captain open the fire and climbs higher up … the feeling is like in a lift with glass walls ( not really ). The basket in which we stand is reaching our chest, so you can not accidentally fall out of it. Anyway, I’m not afraid at all.

I look down at the balloons still on the ground – what a beautiful shine! 400 meters high, 500 … 600 and we’re still climbing. At 800 m height stops the flame … now we float in the wind. Around tens of other colorful balloons are taking their place to float. 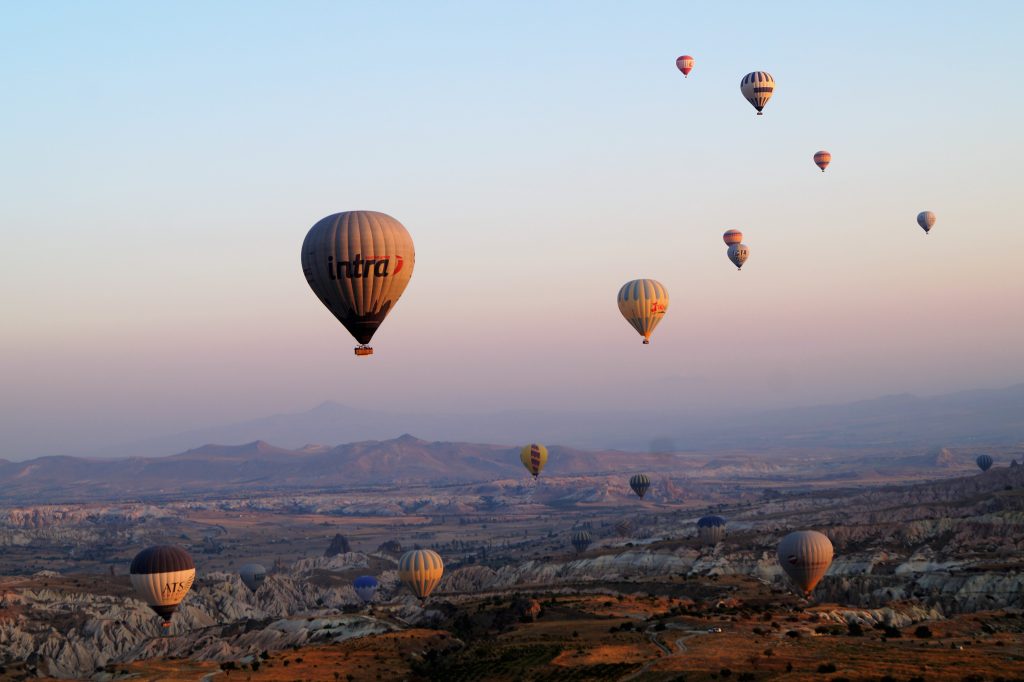 dozens of balloons float over Cappadocia

It’s an extraordinary panorama that I can hardly describe … From here on top you can see the entire region of Cappadocia: the green valley and the valley of the lovers and the valley of the fairy tales … and the sun even rises to the horizon just as we cross the pink valley  … and covers the valley in a splendor of reddish colors in all the tones.

Here in Cappadocia near Goreme natural parc, nature has created the most bizarre shapes in the world – rock formations in the form of “cones”, “towers” and “pyramids” that seem to spill out of the ground. I think there is no other place on earth (or at least I have not heard yet about it) where it is worthwhile to see it from the perspective of a bird. Many of these pyramids have been hollowed out by humans and used as a shelter for hundreds of years. But the relief that has allowed this phenomenon to have probably been formed 3,000 years ago as a result of volcanic activities. Also, the effect of wind erosion and water flow have shaped the cones as they look today. If you do not feel from time to time how the wind crawls my hair and the hotness of the flame that helps us not crash I will think I’m still dreaming … so unreal is the whole panorama that unfolds under my eyes. 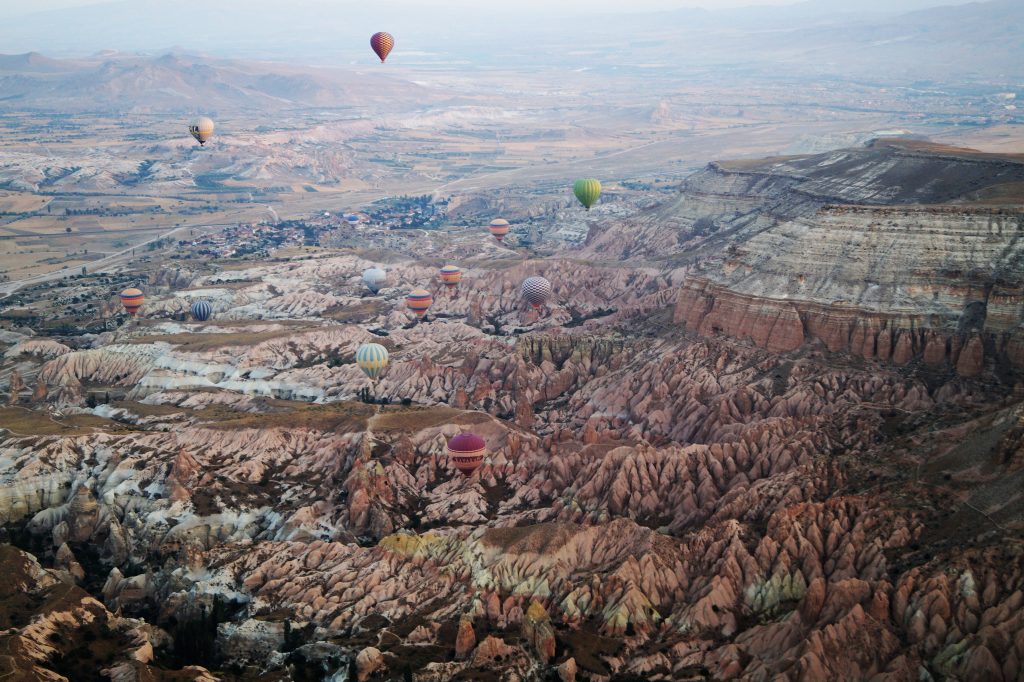 View from the balloon over Cappadocia

Almost an hour we crossed several valleys and hills but before the sun gets too strong heating the air dangerously (so that we could not go down) we have to try to land on a free field. The descent is as fast as the climb, sometimes having the feeling that you will collide with any nearby tree and the first “touch down” attempt failed. We were touching the ground at the same time to be catapulted up again like a ball of poppy, poplar, poplar twice three times – while we were bruised.

Get into the landing position – the captain shouts and he’s a little frightened too. Unfortunately, he had forgotten to explain how this position looks, so everybody is doing what he thinks is best and in the suspense that we all are we are starting to laugh. Few minutes later and some more sweat beads ,we managed to land  and the boys anchored us with some ropes with the whole basket on the back of a pick-up. Now we all laugh with relief. 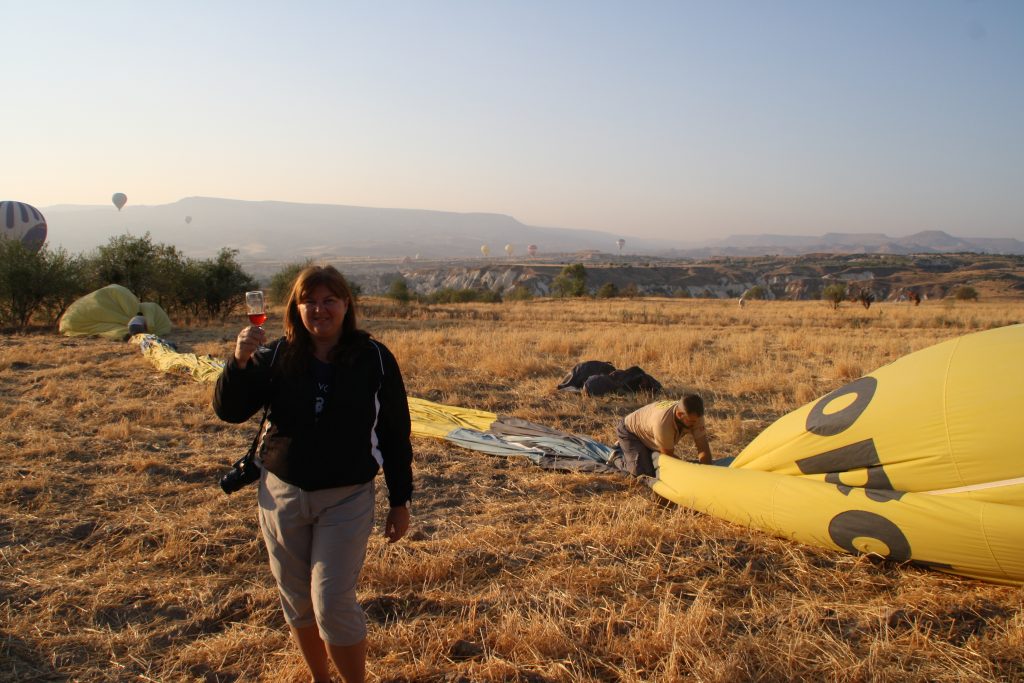 Good luck! that I survived the flight and especially the landing with the balloon

We were given a glass of champagne as we survived…but I, instead of champagne, felt as if I drank the drug of the flight as the great Leonardo da Vinci said:

” Once you have experienced the flight, you will go forever on the earth with your eyes always turned to heaven, where you’ve been and where forever you will want to return!”