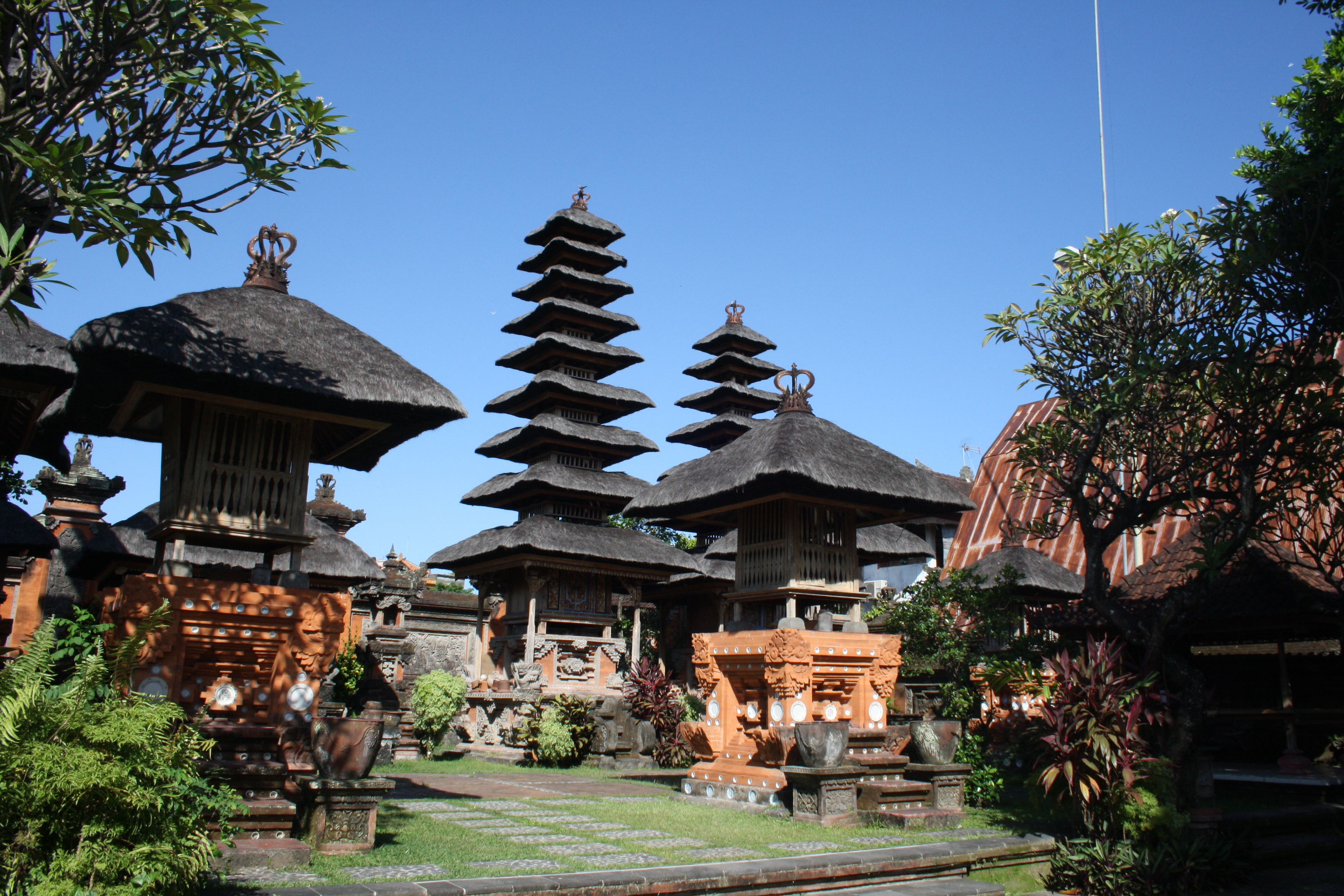 The translation into Indonesian for the word temple is Pura, a Sanskrit word, meaning space surrounded by walls. Their number is very large, at least three temples are found in each village. Even their location is very important, being aligned by mountain, sea and sunrise. The most important temple is the Pura Puseh (or temple of origins), dedicated to the founding fathers of the village and which is located on the highest point of the village (mountain). In the center of the village is Pura Desa dedicated to spirits that protect the village (sunrise). At the point nearest to the sea level is Pura Dalem, (or the temple of the Dead), where the cemetery (the sea) is located.

The first courtyard is not very important, less important ceremonies, meetings and gatherings, or the preparation and arranging of meals. Here is also the tower where a drum – kulkul is placed, with a role similar to the bell tower in Christian churches.

The second courtyard is also separated by a sectioned gate, but before entering the courtyard it passes through another mountain-shaped gate, which symbolizes the holy mountain, and through which it is obligatory to pass. This is a sacred courtyard, and passing through the gate is a purification before going into the yard. These gates are guarded by “guardians” – statues of heroes in history or protector idols, which are designed to protect the temple against evil spirits. Inside the courtyards, sometimes small and simple thrones are placed, places occupied by locals and less important gods. Both sides of the court are statues of idols. The most important are in the mountain side and the least important are in the eastern part. These statuettes are placed with a certain rule and order, some temples have fewer ones. They are usually placed on pyramid-shaped roof-topped roofs, and the statuettes cover the entire surface. The number of steps in the pyramid-shaped roof differs from temple to temple, depending on its importance and power. Most roofs can be 11. (Wikipedia source) 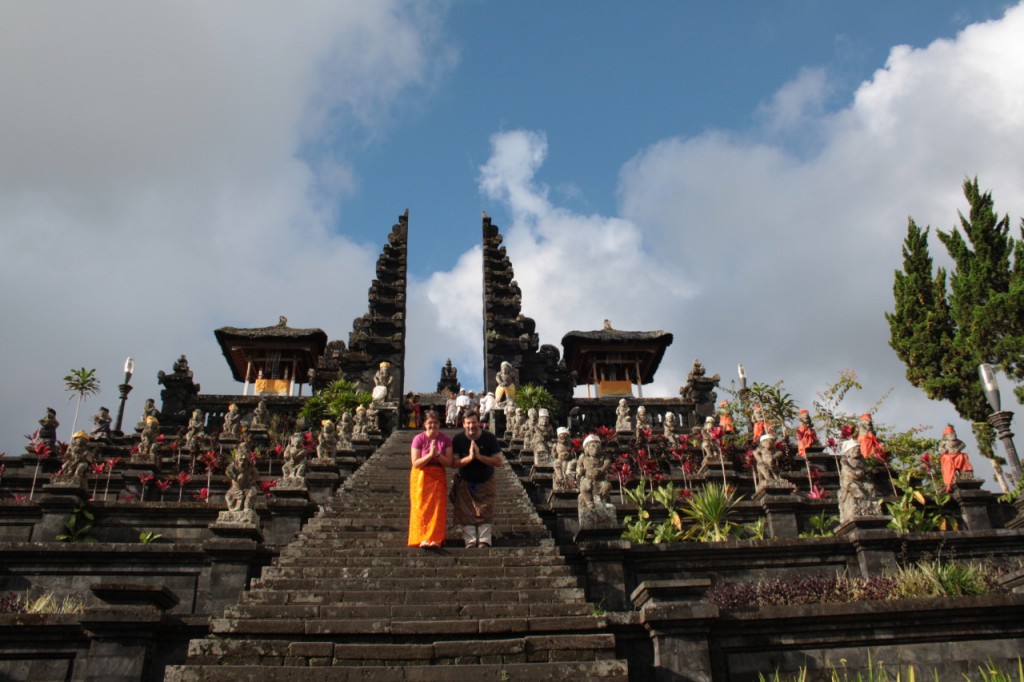 Our Wayan driver for a few days we are very pleased is a typical Balinese. By the way, I do not recommend anyone to rent a car without a driver on Bali Island for several reasons:

-the traffic signs are missing or not respected

-points of interest are very hard to find

When we took the morning at the hotel exactly at the time set his first question was – Were do you want to go today? And because my husband meant a lot of points of interest on the map, and even more temples, not knowing how much time we will have (so how long does it take to get there) answers Wayan – We’ll see how much time we’ll have. First we want to see the Graves of the Kings, and then we’ll see … Wayan is pale and still wonders once again – Were you to go today? We’ll see, just drive … my husband answers.

And then I remember reading that a Balinese must always know where it comes from and where it goes, know the whole way to get to know the middle and find harmony. Just look over the island, stop where you want to go, or make a detour if you have time – you can not. You are lost, and Wayan feels like ours – totally unbalanced …

How many steps? I ask

Many, many … he responds by eyewatching to my husband – to tell him or not to tell him the truth now.

We arrive at the parking lot: Take water with you and good shoes! Wayan gives us the last advice before going on the road.

We buy incoming tickets directly in the car park (as much as 1.00 EUR / person) we put our sarong and cross a small village first. At the edge of the street there are dozens of shops with zorzoanes, women are shadowy and crouching, men carve in wood.

Were are the caves? I ask someone

Go, go down, down … and really at the end of the street I see the stairs begin – I still can not imagine how many are because, after only a few, they make a curve through the trees and you do not see them anymore. We descend, we go down, the street makes several revolutions and from time to time we pass by new locals carrying a bowl filled with rice. Everything is green around us, the street leads through the jungle and if it is a little wider, we see the rice terraces in the right and left of the street in different stages. Some are even sown; others already have their fruits almost ripe, and others are empty with the earth turned, waiting to be planted again. And so I went down … in the middle of the road I realize that the descent is the pleasant side of this road and that as a result of the return I will have to climb again all these steps 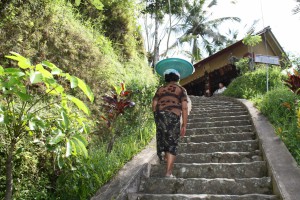 After counting almost 400 steps, we reached down the valley, cross a bridge over a parade and head for the temple.

Pura Gunun Kawi – the Balinese specific temple is almost entirely covered by abundant vegetation.Gunun Kawi (translation “mountain sculpture”) is a complex of 10 high shifts of 7 meters, carved in the rock. It is said that these memorial altars were built for King’s concubines. Four were on the west side and six on the east side of the stream. The always wet walls are covered with green muscles and make this rock wall seem soft and sensitive. We are only a few minutes away, around us the locals lay flowers and this time I say a little prayer – give us ladies strength to manage to climb again the hundreds of stairs waiting for us … 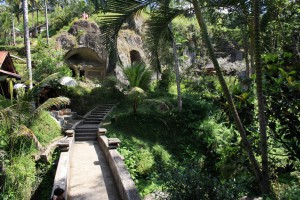 After another 30 km on a country road we stop at the second temple on our route today: Pura Tirta Empul . In the courtyard of the temple spring a sacred source. Legend has it that the sacred source was created by the Indra God who pierced the earth to create a fountain of immortality to regenerate its own powers. An inscription dates back to the foundation of the temple in 926. So for more than a thousand years, believers (and lately tourists) have bathed in sacred waters to heal or strengthen their bodies. I walked my feet into the water basin, and I can say for sure that the pain that we had after the long road (climbing nearly 400 steps) disappeared instantly – but maybe it was just about 15 degrees of water and not her magical powers … 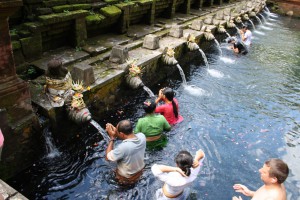 There followed a mountain road with many serpents that led us to a village on top of the mountain.Here, near the Batur Lake of volcanic origin, one of the most important temples of Bali was built.

Pura Ulun Danu Batur is dedicated to the goddess Ida Bhatari Dewi Danu, the Goddess of the Waters.The Balinese believe that the tallest the place where the temple is, the closer the gods, and the better the prayers are heard, and thus the fulfillment of desires is safer. Probably that is why it rains so often in Bali. And yet the greatness of the temple built up on the mountain was not the one that remembered me, but the fact that a group of dozens of women, children and men were making a direct harmony with the temple. Applause, shouting, laughter have made us curious to see what is happening – what do you think? The same, weak, tiny, cute and sensitive women as I have seen before the Balinese women were here dressed in training pants with standing shoes and playing soccer – here’s the world soccer championship!

And to conclude this day as well, I made a small diversion to the temple of Pura Besakih – also called the Mother Temple, the largest and most important temple in Bali. 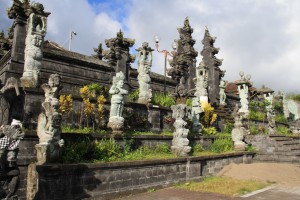 At an altitude of over 1,600 meters this temple is not surrounded by a lush greenery but is almost always surrounded by clouds and fog that makes it look even more mystical than all the other temples I have seen so far . In the temple complex that includes about 200 buildings, you can spend a whole day, and then you can not say that you’ve seen everything. We entered a side-gate and so I got into the middle of a ceremony without being noticed. We sat shady in the shadow of black volcanic stone walls, fascinated by the variety of colors of their costumes and the sound of Balinese music. 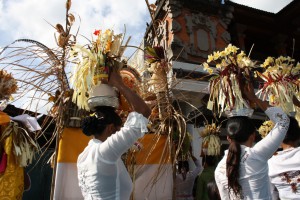 When I arrived near the Candidasa after a day full of unexpected and unforgettable impressions, Wayan had become nervous again. Were ist your hotel, what is the name of the hotel – Sea breeze … we answer

I do not know – it’s new one? Wayan has no peace, to give him a phone number. I’m scouting through my map where I keep all the hotel reservations and my phone number … Wayan phone while driving and at the next junction takes her to a narrow road, with cartons that go further into a dark jungle. It was left in the evening between the time and the road is very poorly lit and the street is becoming narrower until it ends. Wayan stops the car, we nod in the sign that this road can not be the good way and Wayan is calling again. Yes it’s this way … and restarts the engine to take us on a path paved with deeper and deeper stones in the jungle. I hear the waves of the sea and in the distance there is a small advertisement that lights in the darkness of the night. Sea breeze – private property. A large wrought iron door opens automatically. We’re coming to meet the two little boys pulling out the luggage from the trunk.

Wayan is a bit scared … I think chinese business here! he whispers. Oh no! we answer both more and more scared … don’t let us here!

But you will come? Yes, yes! enjoy your stay here …