Seychelles are actually dozens of islands, but three islands are more touristy and more accessible: Mahe where all international planes land, Praslin and La Digue. La Digue is actually the island with the most photographed beach in the world (Source d’argent) and you have to see it, if you want to tell you were on Seychelles.
The island’s archipelago  east of the African continent is located in the middle of the Indian Ocean near the equator.

I admit that I made once that mistake – there was no person to whom I did not recommend Akumal on the Riviera Maya in Mexico when he asks me, which is the most beautiful beach in the world? I was advertising everywhere and to anyone – as if I wanted to share everyone a bit of the happiness I once felt when we were there, we alone on that wonderful beach playing with tortoise in an astonishing sunset.

And did you know what happened?

I was the one who shed tears of despair and even angry thoughts after a few years I went back . The beach did no longer exist! It was totally captured by the “homo NON sapiens” (an unwise, uninteligent and especially unreasonable person) who destroyed everything! The water that had once been the most crystalline of all, now spittles algaes and on the beach was even a tractor who tried in vain to gather and remove them.

I do not know if you understand me, but after I left Akumal forever, vowed that if I found again such a “paradise” on earth I would deny it and hide it, and I will talk just bad words about it … just not to happen again, once it happened in Mexico.

I was sitting in the shade of a coconut tree on the white beach with silver sparks (that’s why it’s called source d’argent) on La Digue Island and I could not believe what I saw! Definitely there is no more beautiful place on earth!

We arrived there so early by accident – the beach is actually surrounded by fence and with entrancefee and the gates open only at 8am but we wanted to see the sunrise and so we came in by the workers’ gate (nobody asked us anything) and so we got to the beach when noboby was there. 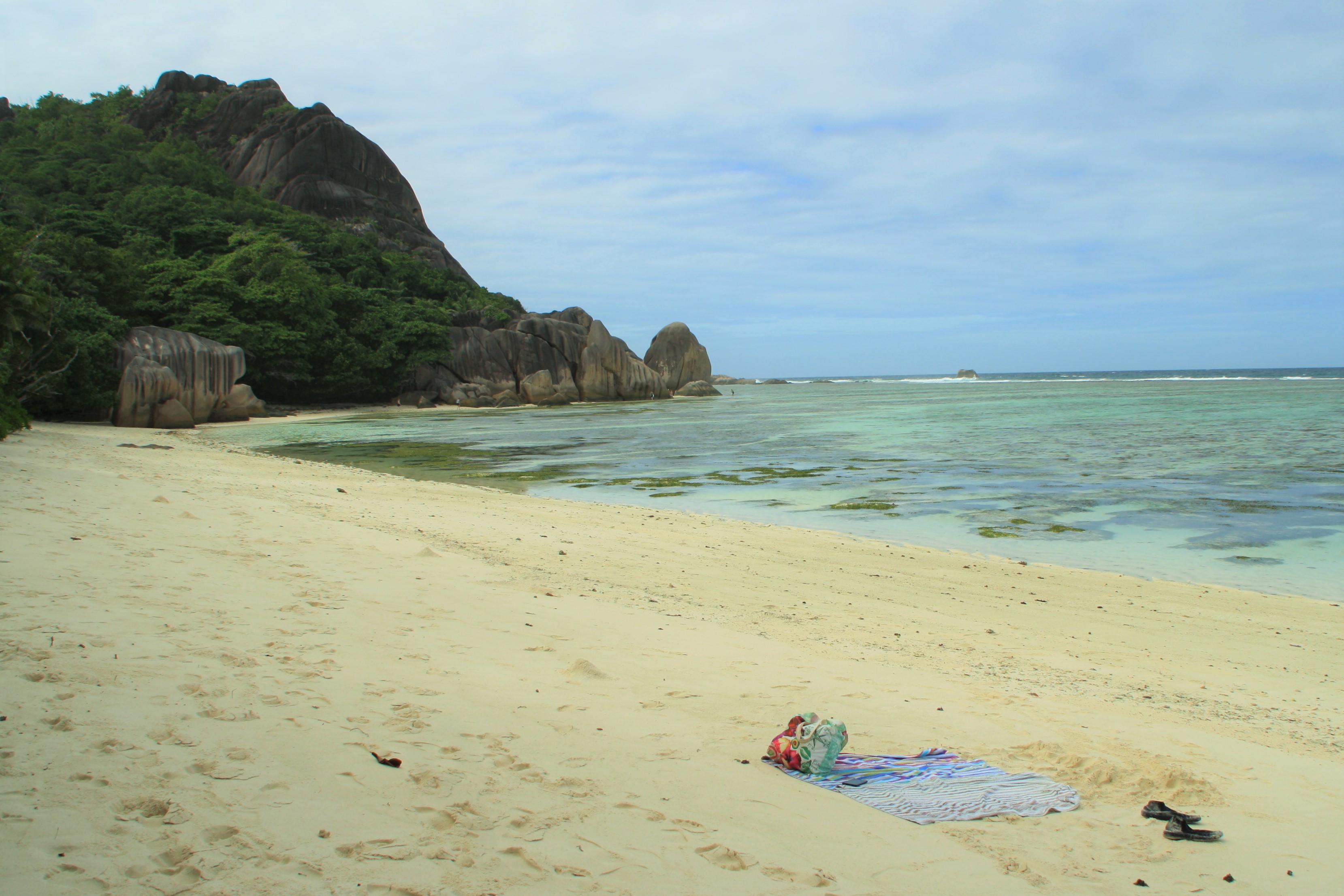 In the morning it was low tide and the color of the water was incredibly beautiful. It is not a beach where you go for a bath (at noon the water gets deeper but it is still unpleasant to swimm because it is full of rocks and corals) it is actually a beach for contemplation … to sit in the shade of a coconut – which here grows up close to the water – and let your thoughts fly.

It is a beach where the beauty that nature gives you will instantly make you smile and the sea breeze will shiver you through the back.
We stood there as petrified, for a few minutes without saying a word 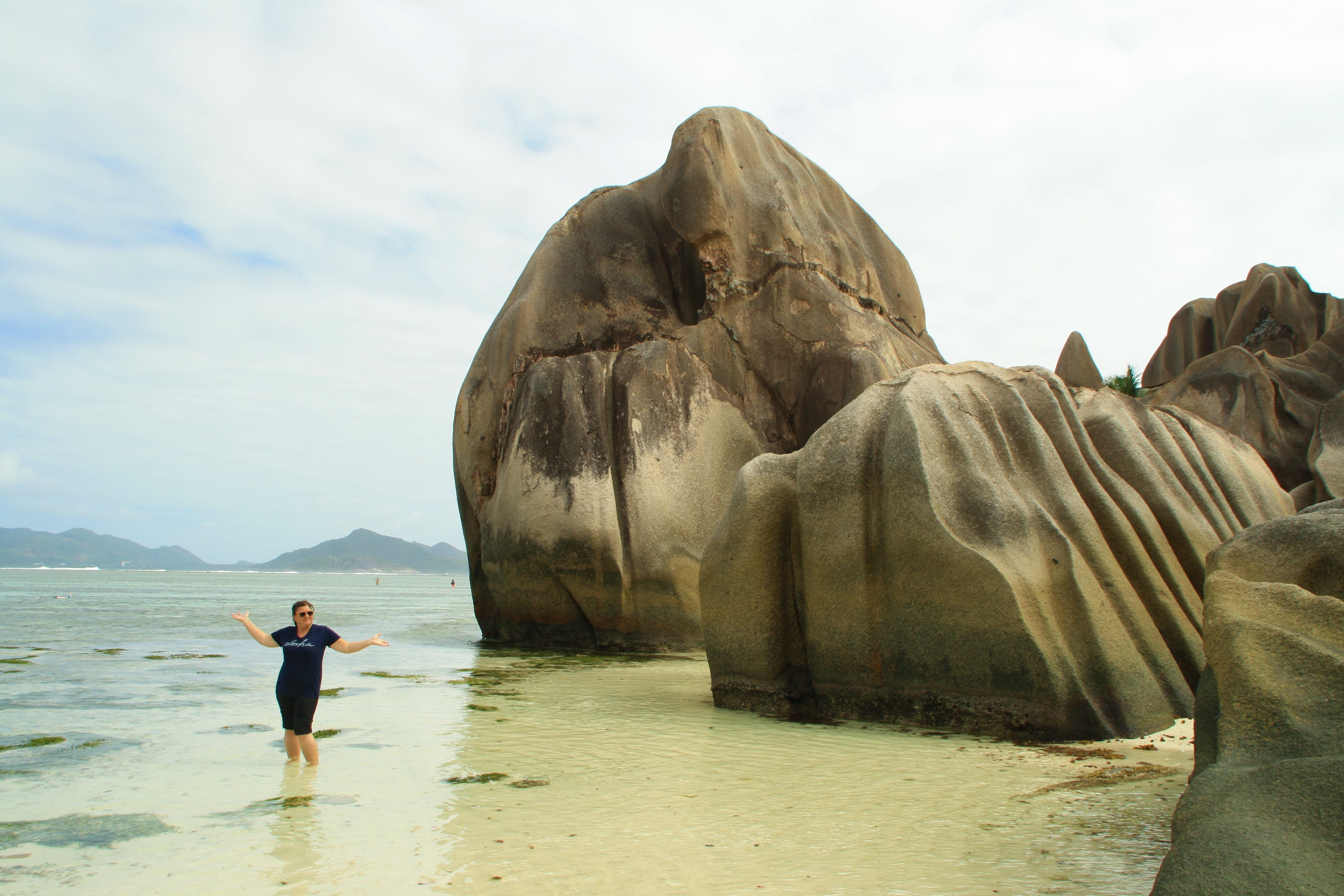 Around 9 o’clock in the morning a couple of shy tourists ( for sure asians) joined us, and then two more, almost all in pairs… I could hear them passing the rocky corridor leading to the sea, they were loud until they reached the sand wenn they stopped laughing or talking as if that what they saw, was so unreal as a soap bubble that could explode at every touch.

We rented a bicycle later and made a tour over the island, discovering other beaches even more beautiful and truly wild, with no footprints on it.

But I do not recommend you go there!

On Seychelles rain almost every day! That’s why everything is green and full of insects. If you have a spider phobia you will be shocked. You will see spiders everywhere and they are big as a hand.

sand is hot and so fine that it sticks to the skin, there is not even a kiosk with beer or ice cream and on the beach there are no sunumbrellas and if you want to shelter in the shade of a coconut tree  I recommend you reading the “Injuries Due to Falling Coconuts” Statistics do not lie, only I try to mislead you…